The BackHauler PMOD has a supporting software project which includes firmware for the Silicon Labs microcontroller on the module itself and a .NET solution that makes it easy to program an interface for a new PMOD perhipheral in a Windows environment.  A simple GUI provides direct access to the PMOD connector and peripheral-specific dialogs. 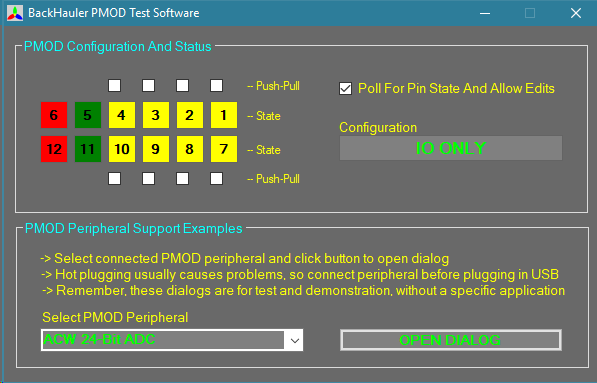 Like most open source, the code is always being changed and refined, so there is no documentation; but, there is also therefore no proprietary API to learn or any other such thing to struggle over.  The code is simple, with few layers, and follows a structure similar to that suggested by Silicon Labs in their USB development documentation.  The USB device codes are not even changed from those used for Silicon Labs development kits. Indeed, this is a living development project, and it is intended to remain that way, but it is also very usable and provides a clean set of examples to reference.

Writing a new dialog for a typical sensor or other device is a painless process for a developer familiar with the .NET environment.  Skilled developers can easily expand this work to create a more complete interface for a specific peripheral, to incorporate other programming languages or environments, or to interface other software.  However, the most common reason to add a new dialog is to explore the features of a new component provided in the form of a PMOD peripheral.

The source code is all free, and the BackHauler PMOD module itself is subsidized and therefore also fairly inexpensive.  But there is a catch.  We are not an open source community company with cheap products and big support blogs and active chat rooms.  We are an engineering an manufacturing company, structured to support the design engineer directly, and at a professional level.  So we need to talk to you.  The software and support is free for those who actually call or write to discuss and contribute directly.  We appreciate your support as well!